This is a continuation of our journey over the past two days. I have to send it to you in parts because I can’t send many pictures at one time – and I know you like the pictures.

We gathered Thursday morning and set out to visit a couple of schools. That means spending time with the Headmasters and/or staff. We talk about the children we have in the schools, their situations and participation in the Road to Hope Program. For many of these children PCAU/Road to Hope are the school’s main contact. One of the girls, Keleen Ahumuza, was very surprised and so pleased we were there to make sure she was settled into her first year as a Senior 1 student. At another school we reported on the health needs of a student and found out that another student had been sent home the day before for not having some fees paid. We were able to clarify our role and saw that the child would return the following day. We also found out that two children we were concerned about due to their living environment had not returned to school.

In “PCAU style,” we set out to find the students. We picked up one of the women who works at Little Hospice Hoima, who has been extremely supportive of the children we are supporting from the Hoima area. I’m not sure what we would do without Octavia! We drove through town, out, out, out to an area of extreme poverty, thatched huts and small reed and mud homes spaced a distance from each other. Of course the sound of the car can be heard at a distance and by the time we reached the home those inside had scattered, leaving behind a toddler and two other young children with a burning wood fire surrounded by stones. Two of the children ran to hide in the tall reeds, but were caught by Mark. 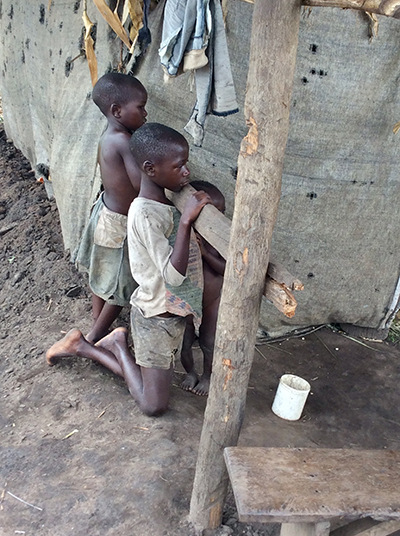 The children we were looking for were the two older children who came to the Road to Hope because they were caregivers for their youngest sister while their mother was gone for long periods of time. The child eventually died when taken to Kampala by the mother. While there the thatched hut burned down because the oldest child, still in primary school, was cooking something for her two brothers and another sister. The children were unharmed, but scattered to relatives until the mother returned and a reed and mud home was constructed. It’s one room. Everyone sleeps together on a mat covering the ground – along with the mother’s latest boyfriend until a short time ago.

The children we found were frightened and it took awhile for them to begin to respond. We gained little information, but one boy thought his older brother was “down the road.” He ran to find him, Mark ran to follow him. Jaffer and Octavia took off in our car. Rose and I were left with the toddler and his sister, and a couple who wandered from a field telling us they were “friends” of the mother. After about an hour the mother of the children walked up carrying water. We don’t know if she was hiding or just came back from drawing the water. Both Rose and I had our cell phones in the car so we waited an extended period of time for the others to return after not finding the boy, but being told both children “were around.” The mother of these children is again pregnant and was very uninterested in sending her children to school. Mark talked and talked with her – seemingly having the “patience of Job” – but she was not forth coming with any information or showing interest in the education of the children we were looking for. We gave our entire afternoon to this “hunt” and Mark would have stayed in Hoima overnight for the second night to search again today if he were traveling on his own. Mark, even in his new role as Country Director, is so passionate about the most vulnerable of our children in the Road to Hope. I have to admit it was a frustrating, tiring and discouraging afternoon, but PCAU and the Road to Hope will “search out” those in need of any service. I relay this story to give you an example of what PCAU will do to reach the people most in need. Education of children is their hope for a better future and many help offer it to the children and help them through their challenges.

The ride home at the end of the day was long. We arrived late, but good to be back for my last full day!