Everything is going well for me. We seem to be having a lot of rain these past two days/nights so we are thankful that our days with the children at camp were sunny and bright. It has also turned cool – “cold” to the Ugandans. The staff has asked me, “Is this the way the weather feels in South Bend?” I told them, “much colder!” They didn’t think they would like that… and I said many in South Bend don’t like it either!

I told you I would share a brief story from camp about one of the children in the Road to Hope Program – who I really can no longer call “a child” – Morris! He has been in the Road to Hope since its beginnings. Due to his age when he started school, he struggled academically but he remained in school, did his very best and went on to vocational school. He is about to graduate this year as an auto mechanic. He is tall, lean, gentle and hesitant with his English, but over the years we have come to communicate well. He is from the Hoima District – the District where Rose’s mother lives. He has “drifted” from living with family members during his school breaks, and often stayed at Rose’s mother’s home. Her brother, Armstrong, was a frequent visitor to Morris on visiting days at Boarding School. 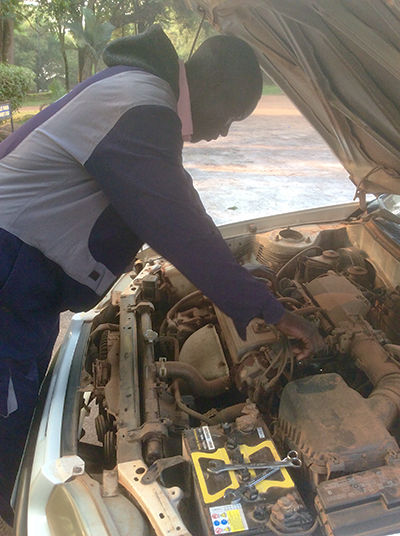 The staff and children are transported to camp in two smaller size buses. We got there and back safely, but our bus driver sensed something wrong with our bus during the ride to camp and attempted to fix it during the camp. In the afternoon (free time for the children to enjoy the various activities), Morris proved his new skills by taking over the repair job – unknown to the rest of us at camp! He just offered his services and did it. I was looking for him when we were ending camp for the evaluation and cutting of a cake, mainly because he had offered to carry my backpack and I wanted to make sure I had it prior to leaving the camp. A staff member found him at the bus completing the repairs so I didn’t get an “action shot” of him. I sat next to him on our ride home, and silently hoped he did a good job! He was proud and asked me if he could use some of his education money from his sponsor to obtain a driving permit prior to graduation, because in diagnosing and repairing cars he needs to be able to test drive them. I told him I would discuss it with the Coordinator of the RTH, but he needed to call her when he got back to Hoima to make the request directly. It will be approved!

The following morning before leaving for home Rose asked Morris to check out her car engine. He took her request seriously as some of the other children looked on! He is an example to them!

This is one of many stories of what our hopes are for the children – and what an education means for them and their future. All of them are different with different levels of abilities and different dreams. What we offer them is our love and concern, our understanding and counsel, our financial assistance and respect, and in doing so we offer them hope. Thank you to all who support this program in any way to brighten the future for these children.