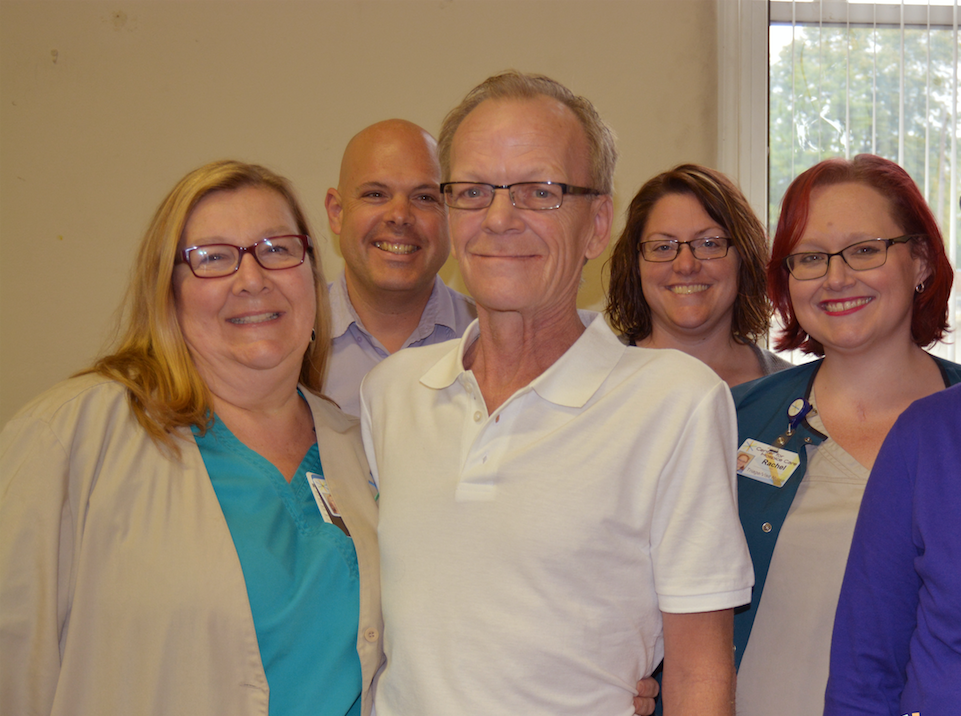 When church after church refused to baptize a dying man, the Center for Hospice Care stepped in to help grant his last wish. Clyde Young just wanted to be baptized before AIDS and other illnesses take his life. Every church he called, however, turned him away, because he’s gay.

When he finally found one in South Bend that invited him in, his family let ABC 57 share in the moment on Thursday, October 12. “Happy. I don’t think anybody knows how happy,” said Clyde Young. As AIDS ravages Clyde’s 55-year-old body, his dying wish was to cleanse his soul. “It’s been a long road…Every church that he went to or minister that he went to, refused to accept him in the church or even baptize him because of his background. They said that they couldn’t accept him, and therefore God would not accept him,” said his oldest sister, Cheryl Knepple.

“I went to the family church there, and they’re the ones that said ‘no,’ I’d have to change the way I live, and I don’t want to change who I am. I want to be me,” said Clyde. “I just don’t think anyone should be rejected. God accepts everyone if you accept him,” said his sister, Cheryl.

Clyde’s family says they were especially surprised pastors would turn away someone who devoted his life to helping others. Clyde joined the Navy when he was 18, serving for four years. Back at home, he soldiered on in the fight for the rights of those living with HIV and AIDS.

“Before there was an AIDS Ministries/AIDS Assist, he was on the front lines…He did a lot of volunteering…so that we could stock the pantry,…dealing with people who were friends, families, loved ones, who were dealing with HIV/AIDS, living, dying,” said Risa Silas, Housing Specialist for AIDS Ministries/AIDS Assist. Now, he needs to lean on others. “It’s a daily struggle to walk. With some of his medications and stuff, he ends up getting thrush in his throat, where he can’t swallow, he can’t eat, he’s got cotton mouth all the time. His neuropathy hurts his legs, so he’s in constant pain,” said Cheryl.

The pain had only been made worse by his church’s rejection. “[I’ve] been turned down being baptized twice, and I’ve always been scared to have the third strike,” said Clyde. He divulged his fear to his Center for Hospice Care case manager when they met a couple months ago. “That of course just got me boiling mad, and I just said, I think you’ve come to the right place. I think Hospice is something that maybe we can make this happen,” said Center for Hospice Care case manager, Laura Lethbridge. Laura, along with spiritual care Counselor Arlin Cochran, and eventually, triage nurse Rachel Bridegroom, made it their goal as well.

They called four to five churches until “finally finding a place willing to open their doors and their hearts,” said Rachel Bridegroom. “He was just heart-filled. He was so excited…He said, ‘Sis it’s going to happen! It’s going to happen! I’m going to be baptized!’ and then we all started crying,” said Cheryl. “I knew I had family support, but I didn’t know I had this much,” said Clyde, tears welling up in his eyes. Clyde’s family and friends say that even when those tears of joy dry up, the man who blinked them away will leave an indelible mark on their lives.

“[He’s] a person that loves everyone and everything about life,” said Clyde’s oldest sister. “Clyde is passionate. A force to be reckoned with,” said his friend Risa. “My life is better for knowing him,” said his case manager Laura. “I wouldn’t trade my brother for the world,” said his younger sister, Julie Hooker.

Now, they’ll be able to cherish the moment Clyde’s dying wish was granted.